HikeWest has raised the hiking / bushwalking community’s concern over the increasing impacts and future extent of mining expansions on WA’s trails in the Darling Range. Most of the public and government agency focus is on the Bibbulmun Track and Munda Biddi Mountain Bike Trail, but the issue is much broader and serious. 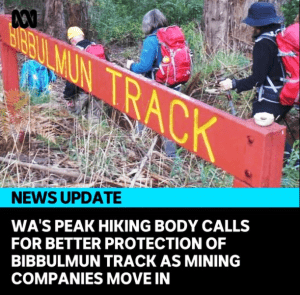 HikeWest sees a need for much greater recognition of the anticipated long-term impacts.

Commenting on its recent submission about a current proposal by miner South 32 Worsley Alumina, HikeWest noted that the company’s expansion of bauxite mining near Boddington would see it cutting into about 1.2 km of the Bibbulmun trail which would then have to be realigned. While that may seem only a small stretch of track, HikeWest President Dave Osborne says it’s a sign of a much broader issue.

Just 20 km southwest of the area affected by the South 32 proposal, a separate major expansion proposed by Alcoa is also set to force a re-alignment of 10 km of the Bibbulmun Track close to Dwellingup. That would then enable the miner to destroy an area of mature jarrah forest which the local community has been working for many years to protect as a special Discovery Forest. 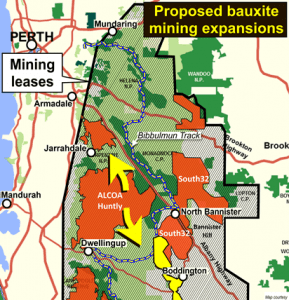 But lesser known trails such as the Balmoral Track near Jarrahdale will also eventually be impacted by mining expansions. As bauxite mining moves north, much of the jarrah forest and wandoo woodlands closer to Perth will also be impacted by mining (more info here). The environmental costs to the northern jarrah forest and wandoo woodlands within the 10,000 sq km of bauxite mining leases near Perth are forecast by independent experts to be massive and enduring.

Meanwhile new pressures are growing to also mine the Darling Range for additional metals eg Chalice Mining’s operations expanding across Julimar Conservation Park near Toodyay are not only a major threat to the continued success of DBCA-Parks & Wildlife Service’s wildlife recovery program there, but will also impact on the Camino Salvado Pilgrimage Trail. And Rio Tinto plans to explore more than 1000 sq km of new leases from near Pinjarra to south of Collie; likely impacting not only on the Dwellingup Discovery Forest, but also on yet more sections of the Bibbulmun Track and Munda Biddi MBT in years to come.

Eighty percent of WA’s population resides in Perth. There is a clear and increasing urgency for new WA State Government strategic planning and land management policies to address the existing and future needs of Perth’s growing population, taking into account the impacts of mining on our natural environment and our trails. In the absence of such planning, the opportunities for developing much-needed new circuit day walk trails in attractive natural forest environments within easy reach of the city will certainly be lost forever. 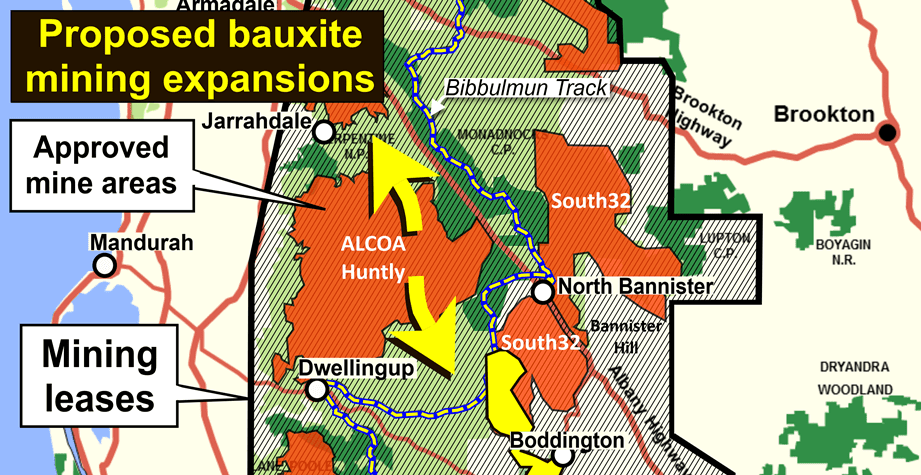