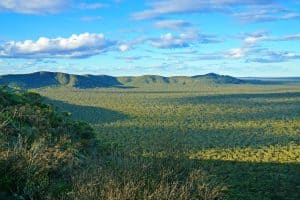 The State Government recently announced the start of a 5-year plan – a “Plan for Our Parks” – aimed at bringing opportunities for extensive new and expanded national parks and reserves to fruition across WA. This included the very heartening news for many, including adventurous bushwalkers, that one of the strategic priorities of the plan is to create a new national park in the remote Helena Aurora Range, about 350km east of Perth and 100km north of Southern Cross.

The Helena Aurora Range (or ‘Bungalbin’) lies within the Great Western Woodlands and includes the highest point in the southwest of WA outside of the Stirling Range. There are many other ranges in WA similarly formed out of banded iron formation, but the undulating and tortuous landscape of the Helena Aurora Range has no equal outside of the larger ranges over 500km northwest. The Range includes numerous cliffs, caves and a multitude of other impressive rock formations. It also exhibits very high biodiversity. 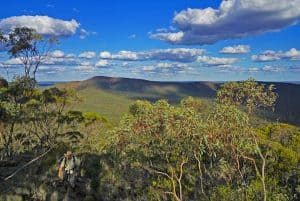 Among the many plant species found in the area there are five unique to the Range, including two shrubs that grow out of the cracks and fissures in the rocky outcrops. There are also tall trees, including salmon gums, on the surrounding plains, and Inland Wandoo grows in small pockets on the upper slopes of the range, like mini-woodlands.

Yet, as recently as two years ago this largely unspoilt area was the subject of very different plans: To create two low grade iron ore mines which would have devastated the Range. Following advice from the Environmental Protection Authority, the mining plans were stopped and the government promised to take the steps needed to permanently protect the Range’s unique biodiversity and landforms. 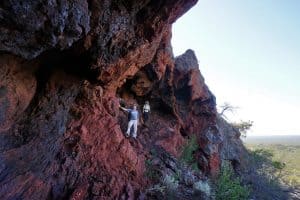 Despite its remoteness, the area beckons suitably prepared walkers to visit and explore some of the best bushwalking opportunities in WA’s outback. There are few formed trails here; The walking options are mostly unmarked, off-track routes. But the open woodlands/shrublands enable walkers to progress at a good pace and they offer spectacular and expansive views along the Range and across the surrounding countryside. Helena Aurora Range advocate and long-time bushwalker, Carl Erbrich, has recently published an overview of the walking opportunities on the advocates’ website: Bushwalks on the Range includes detailed information (including GPX files) for six walks that straddle the entire range.  Read More 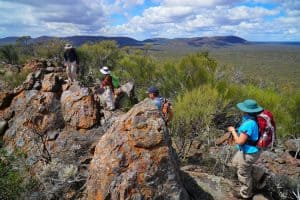 A number of walk options are presented of varying length and difficulty. Some of the best walks are quite short (half-day), including a circuit of some of the lower peaks to the west of the main range. This includes the rocky summit of West Peak, which is the only peak in the range that boasts a 360 degree summit panorama and so offers spectacular views to the main range to the east, and over the surrounding sand plains to the Mt Jackson Range, Die Hardy Range and Mt Manning Range on the horizon. This walk also takes in an impressive monolith of banded iron formation that can be ascended with care. It is poignant to reflect that this was right in the centre of one of the proposed opencast mine pits! 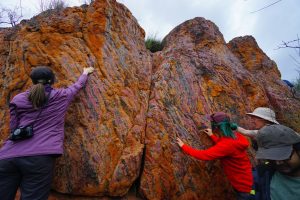 Another half-day highlight is the ascent of South Peak along its western ridgeline to surely the best viewpoint in the entire range. To the north, a wonderful vista unfolds over Bungalbin Hill and out to distant ranges on the horizon. To the east, the view is even more spectacular, looking out over the entire crescent-shaped Main Range Ridge line.

The Main Range Ridge walk is the ultimate single-day walk in the range, traversing all the peaks on the main range from Bungalbin Hill in the west and including the Highest Peak in the range and onto the saddle where the only formed track crosses the range at Bungalbin East. This is an arduous walk with significant ascent and descent over rough ground but will amply reward the walker with a variety of magnificent vistas over most of the journey.

Another superb full-day walk explores the remote North and NE Peaks. This is a photographer’s delight, offering magnificent views over North Peak, East Peak and the Main Range Ridge line. 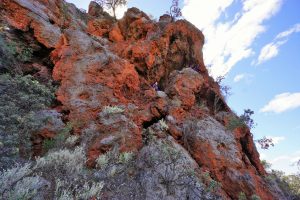 Last but certainly not least, the Bungalbin East area hosts numerous impressive rock formations, including cliffs, caves, rock towers and buttresses. A full day walk explores many of these features as well as ascending the second highest peak in the range. East Peak offers great views back over the main range and also out to the isolated North and NE peaks.

As walkers head home from their exploration of this beautiful and unique area, many will no doubt reflect on just how close all the rock features in the Bungalbin East area came to ending up in ships bound for the steel mills of China.

Acknowledgement: Carl Erbrich kindly provided the text and photos for this post. 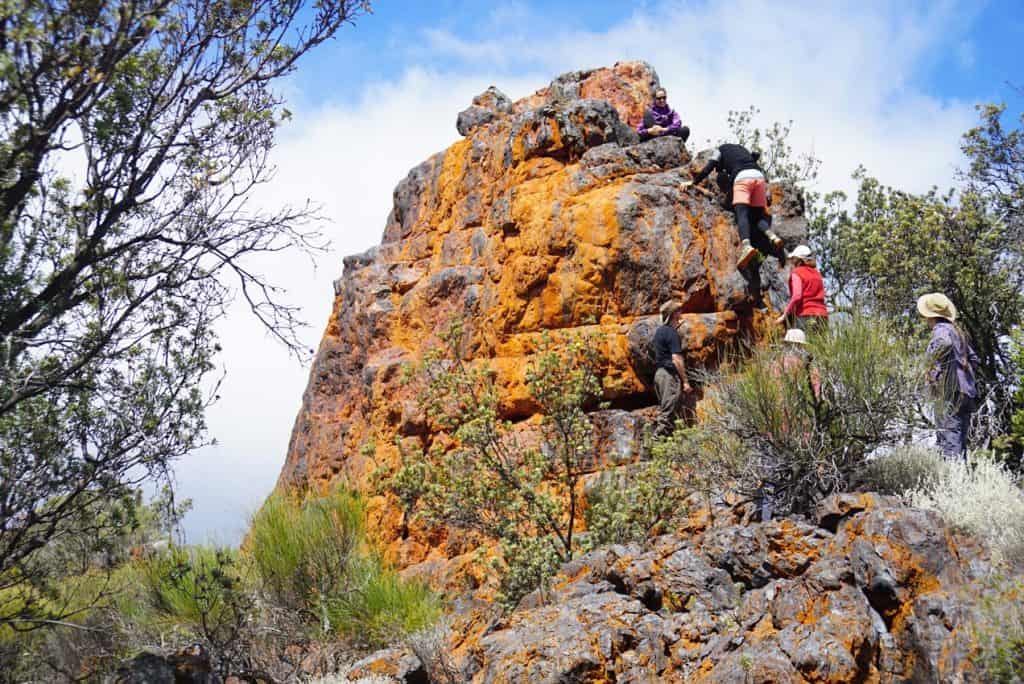